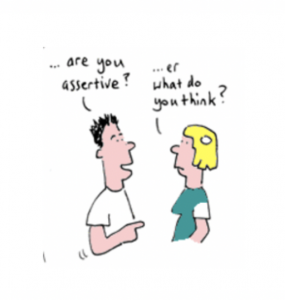 Have you ever felt powerless to get your needs met?

Have you ever felt you can’t say what you want to for fear of hurting someone or making them angry?

Have you sacrificed your own needs to make someone happy or keep the peace?

If so you have just done PASSIVE BEHAVIOUR.

If not then someone you know may be behaving in this way.

Passive people spend more time worrying about others than actively pursuing their needs and goals.

Why would someone be Passive?

Traditionally, it was the feminine role to: ‘put up and shut up’.

This was the Shadow or Stereotypical Feminine.

For thousands of years women had few rights and no power.

Any rights they had came from the masculine: their husband, father, step-father or brother.

These men owned her and had power over her body, behaviour and even opinions.

In order to survive, women learnt to be the obedient child, completely dependent on someone else.

This Shadow or Stereotype is not the truth of the feminine but rather a habit of culture.

In history there have always been examples of powerful women.

They were however the overwhelming minority but they do show what is possible against all odds.

Some, like Joan of Arc, ended their lives in tragedy but others did not.

Elenor of Aquitaine, Elizabeth the First and Catherine the Great lived long lives that ushered in Golden Ages and contributed massive advancements to humanity.

But for the vast majority of women this was not possible, even if they dared.

They learnt to be what others wanted them to be.

So even though times have changed dramatically, we still have a large majority of people who learnt to do Passive Behaviour, passed down through the generations.

Unfortunately, while people engage in passive behaviour to protect themselves, it often leads to the exact behaviour that makes them the subject of abuse, neglect and bullying.

Of course it is not just women.

They may have had passive, disempowered fathers whose example they have followed.

They may have had aggressive fathers, step-fathers or brothers themselves.

Or they may have seen aggression against the women in their families.

As a result they vowed never to be like that, but because they didn’t have an alternative example of positive power, they became passive instead.

Then the traditional sex roles are reversed.

The man becomes more passive and the woman more aggressive.

But it’s not that simple.

You see when someone becomes passive it changes the whole dynamic of a relationship.

Passive people when unhappy tend to withdraw, become depressed and don’t express their needs and wants.

A good partner will do their best to draw them out, give them opportunities to communicate, encourage and support.

But when this falls on deaf ears, they are stone walled by silence and all attempts to communicate are resisted…

Well it can be VERY frustrating and can try the patience of a saint!

So in these circumstances, even the best of us can get annoyed, say things that are harsh and feel angry.

Then the Passive Person withdraws even more!

And all the time the frustrated person can look like an aggressor, when really they are not the original cause and they want to find a solution.

What can we do about it?

If you are being passive, it really is time to step up.

If when you step up you feel criticised, then make sure you communicate what you are attempting to do and what you need in return.

‘I know I haven’t been pulling my weight and I want to step up now. It’s just when I do, sometimes I feel like it’s not good enough. I want to change things between us and I’ll need understanding with my attempts.’

Remember the other person may already be at the end of their tether.

They may even feel like it’s: ‘too little too late.’

They may have been asking you to step up for weeks, months, even years.

It could be fair enough that they feel exasperated.

So instead of withdrawing in the face of resistance, step up further.

‘I really appreciate how frustrating this is for you. I want to take action and do things differently.’

And see what the person says.

If the person truly is aggressive instead of just frustrated…if the person is actually abusive, sociopathic or wants to blame you for everything and not work towards change…

Well, you might want to think about whether you really want to be in the relationship.

But let’s face it, even the best relationships can have times where there is a ‘Mexican Stand Off’ and the only way out is communication not more ammunition!

It’s time to start the conversation, instead of always leaving it up to the more active person to begin.

If you are on the receiving end of Passive Behaviour.

Remember that going into Aggressive Behaviour and venting is unlikely to help!

A more understanding approach will often get better results, flush out underlying issues and help discover the root cause.

It is quite possible, the person you are with is suffering in silence with depression, or they feel powerless or like a failure.

Nothing will change that, if you make them feel worse. They already feel bad enough.

It’s time to take a deep breath, get vulnerable and communicate the hurt that sits under the thin veneer of your own frustration.

‘I really miss you. I feel like we aren’t connected any more. I know it might not be true but I feel like I am responsible for everything and that makes me feel burdened. I feel like I am the one who moves towards you and when you move away I feel rejected and sad. Is there something going on for you that you want to talk about?’

Remember that if you have been stuck in a cycle of resentment and frustration, the person you are with may not trust you with their vulnerability.

You may need to give them time to process.

‘I really want to change things between us and would love to understand what’s going on for you more. I realise you may need some time to process. I want you to know I am here for you, even if you haven’t felt that way in the past. I want things to be more loving and understanding between us.’

If they can’t or don’t respond straight away, then go away and do something that brings you joy, is productive or creative, instead of waiting for them to change so you can do what you want.

Go ahead and find your own happiness which is not dependent on your dynamic with this person, because they may choose never to change.

Then you will have a decision to make whether you can manage that inside this relationship or whether you don’t want it any more.

Either way finding your own bliss, will help you make appropriate decisions.

It is possible that the Passive Person will miss your attention and come to the party!

In the meantime, encourage, thank and be grateful for any small movement towards you while they test the waters of change.

If you are the more active, assertive and extroverted one, then your partner will often by default, be the more passive, internal and introverted one.

Even if this is not the case at work or in other circumstances.

So don’t expect the roles to be reversed over night.

After all you don’t want to become the passive one but you may need to relax the active role to give them more space.

Of course clearing emotions from the past such as fear and anger helps enormously.

As does clearing patterns of relationship we pick up from our parents.

We can do this effectively using a tool like my Matrix Therapies.

And this is a common relationship dynamic and we also need the right communication tools.

It’s tempting to feel that if only the other person could change then all would be well in the relationship.

Dynamics however takes two people to create and takes both parties to solve.

If you feel the other person doesn’t want to change, then you are left with changing yourself, communicating and then seeing what happens.

In the end if no one changes the dynamic will remain the same.

So it is up to the person with the knowledge and desire to begin the change.

It is definitely worth the effort, because the alternative is retreating into silent corners of the Boxing Ring of Suffering and that is not good for anyone.

When both parties work on a solution, even if you begin the process, there is greater depth and a more exquisite and tender place for love and evolution.

This is more valuable than one can express because it gives life meaning beyond the veil of existence.