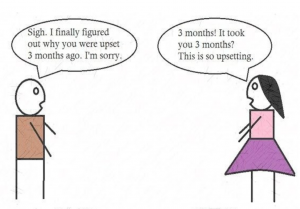 Have you ever felt someone is upset with you but you don’t know why?

Have you second guessed your behaviour attempting to work out what you did ‘wrong’?

Or perhaps felt guilty for something that isn’t really your responsibility or you didn’t even know about?

Sure, maybe it’s time to clear some negative beliefs and emotions, that’s always a great option.

You’re on the receiving end of PASSIVE AGGRESSIVE behaviour!!

And you need to take a new approach.

Why would someone be Passive Aggressive?

Usually it is because they feel powerless, stuck or resentful.

Instead of simply communicating their needs and wants, they do one or more of the following behaviours:

This can be very frustrating.

You can find your self thinking:

And then all of a sudden you feel angry YOURSELF!

This can make the whole situation worse!

Before you know it you’re having sleepless nights . . .

But you decide it’s all in your head.

Or even your fault but you don’t know why.

Then THEIR behaviour gets worse.

Now you start avoiding them.

It truly is a lose/lose situation.

And all the time you feel controlled and powerless and don’t know why.

You can even look like the ‘baddy’ but you were not the initial cause.

It really is pretty crazy making.

(Which is why, if you happen to be the one who is being Passive Aggressive, it’s best to come clean and just tell the other person what’s bothering you.

Just ensure you do this in an ‘I Focused’ manner, while taking full responsibility for your part.)

What is the deeper reason behind Passive Aggressive Behaviour?

The reason some people don’t communicate openly is because they fear rejection, abandonment or reprisal.

Or they fear hurting, rejecting or disappointing you.

It can also be a habit of communication they learnt from their parents or culture.

When someone agrees to something they don’t want to do, there is ALWAYS resentment.

And resentment builds and leaks out, even when suppressed.

When someone does not tell the truth of who they are, it destroys emotional intimacy.

Because loved ones don’t really know who they are!

And let’s face it, you can’t have a deeply, profound relationship with someone you don’t know.

It also eats away at self-esteem, trust and love for both parties.

Most people don’t know what to do about it.

So they self-pacify by escaping into social media, technology and work.

What can you do about it?

It is really important when faced with someone’s Passive Aggressive behaviour, that you don’t end up doing it back!

The best approach is to be really honest, gently ‘call it out’ and say how it is affecting you.

Something simple is usually best:

‘You seem upset to me. I am concerned it is something I’ve done. And I don’t know if that’s true or what it might be. I’d really love to find some time to talk because I’m starting to feel anxious about it.’

Whatever the outcome at least you have been honest and empowered.

You can now measure how mature the other person is by their response and make some decisions about what you want to do next.

What are the common responses?

Remember that manipulative people rely on you blaming yourself, instead of seeing who THEY are and what THEY are doing.

By being honest you just saved yourself a lot of time and heartache.

You also just stopped being their Patsy (someone who is easily deceived, manipulated and taken advantage of) because you were empowered enough to call it out.

But remember Passive Aggressive behaviour is really common, even with really GOOD people.

In many cultures and eras it was the norm because many people had to do what someone else told them, to survive.

And they were much more dependant on others than we are now.

So before we get all judgemental about others, we need to remember that:

We have all done Passive Aggressive behaviour at some point!

We have all done things we don’t want to do, felt resentful and blamed someone else.

We have all avoided difficult, emotional conversations.

We have all felt angry with someone and then ‘tried’ to suppress it or deny we have any anger at all!

Even if we have ‘tried’ to blame ourselves instead . . .

We are still being Passive Aggressive and it will still lead to resentment because the situation is not resolved.

In fact, sometimes people blame themselves to AVOID difficult conversations with others!

In the end, if the relationship is valuable to you, it is worth giving both of you a chance to work it out and understand each other more deeply.

The key is not: never doing Passive Aggressive behaviour.

We have all had times when we get grumpy and don’t want to talk about it!

We have all had moments when we blame others because we can’t get our big girl or boy pants on!

If we do communicate, can we:

Then can we hold the emotional space when the other person responds?

Remember they may be really shocked by our revelation and frustrated too.

They may wonder why communication didn’t happen earlier.

They may wonder what else you’ve been keeping from them and if you actually love and trust them.

They may be triggered by their own fears of not being good enough or abandonment.

They may feel really insecure because they thought all was good between you and now they find out that wasn’t true.

It is important to know that these are all normal responses.

The best thing to do is to validate for them for the other person. You don’t need to be defensive or argue back.

Once you allow these feelings to be aired and listened to, they usually settle down.

Then there is space to realise that you both love and care about each other.

That in actual fact the whole problem has been about self-esteem, self-worth, self-love and communication, usually for both parties, and nothing more.

It also allows both parties to be empowered, have choice and move into solution focused, creative problem solving conversations.

These are all significant keys to great relationships with others and also within.

If someone never wants to engage in honest conversation, it maybe worth rethinking the relationship and the time you spend with that person.

And during all of this remember:

And most important of all, it’s best to be honest with ourselves and others.

It’s always OK to have your own needs and be self-loving.

Just ensure you communicate that to others in a loving way, so they also have choices.

If someone loves you, they want what’s best for you too, they want you to be happy and empowered as well.

So don’t sacrifice yourself for love, instead communicate and find loving, creative, win/win solutions.

In the end this is best for all.

It’s never fun to be around someone who is martyring themselves.

But it’s always inspiring to be around people who can communicate lovingly and authentically.